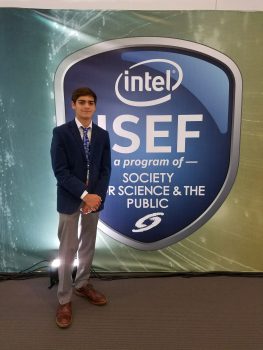 After winning first place at the Texas State Science Fair, Midway Junior Remi Labeille competed in the 2018 Intel International Science & Engineering Fair (ISEF). In the category of Chemical Energy, Remi won second place and $1,500 for his project entitled “Genetic Engineering Yeast to Produce Lipid-Based Biofuel for the Future.” In his project, he studied the production of biofuel in yeast under stressed environments. He received two scholarships and also has an asteroid named after him! His sponsors are retired teachers Kathy McMillan and Melissa Rhoden.