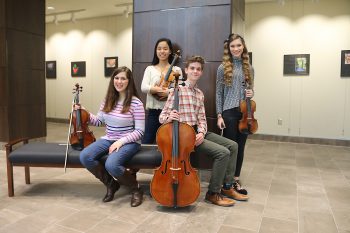 Midway High School has four orchestra students selected as All-State musicians by the Texas Music Educators Association, an honor that only the top three percent of musicians who initially audition achieve.

High school students selected to perform in the All-State concerts have competed through several levels of auditions beginning in the fall of 2016 to qualify at the state level. All-State is the highest honor a Texas music student can receive.

All-State students participate in three days of rehearsals directed by nationally-recognized conductors during the TMEA Convention, followed by performances for thousands. For the All-State concert schedule and conductor information, go to www.tmea.org/convention.