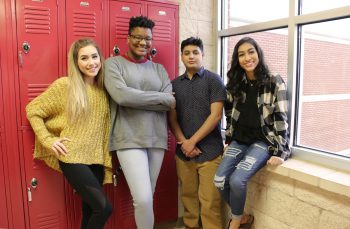 Four Midway seniors recently qualified as semifinalists for the nationally renowned Dell Scholarship, which provides students with financial assistance, resources, and mentoring to ensure they have the support they need to obtain a bachelor’s degree.

The Dell Scholars Program is a college completion program for high-performing students in need of financial assistance.  It is an initiative of the Michael & Susan Dell Foundation, which was established in 1999. The gift was inspired by Michael and Susan’s passion for supporting children’s causes as a way to make an even greater difference in a measurable way. Finalists for the scholarship program will be announced in March.

Midway’s four semifinalists are all seniors in AVID, a program that helps students on a path to college and career success. It includes additional academic, social, and emotional support that will help students succeed in their school’s most rigorous courses.

Pedro Salinas is active in broadcast and BPA film production. He plans to study video production or film making in college. He has participated in Midway’s strategic gaming club, as well as Spanish, French, and chess clubs.

Mekayla Herndon is National Honor Society secretary. Her participation in French Club and National French Honor Society will help in her plans to study linguistics at Swarthmore College. She was also active in HOSA, UIL, and Philosophy Club, while also volunteering and singing for Victorious Life Church.

Jasmine Salazar is an MPACT leader, was vice president of Soccer Sidekicksm nad she has been active in HOSA, Spanish Club, and National Spanish Honor Society. Upon graduation, she plans to pursue the field of dental hygiene.

Madison Powell’s school activities include HOSA and FFA. After graduation, she plans to study pre-med or biology at LSU or the University of Texas.

All four seniors are also Spirit of Midway award recipients earned for volunteerism.