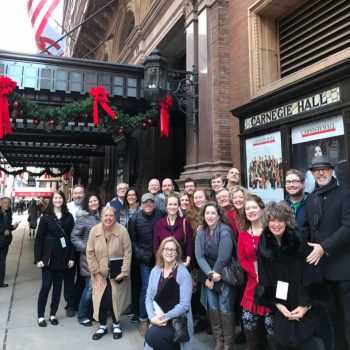 The choir was selected to perform because the DCINY planners learned of the CTCS’ Beethoven concert last spring which received wide recognition.

In addition to Evan Watts, many Midway community members and alumni also performed with CTCS in New York City:

Many of them have served as Midway Choir Booster Organization (MCBO) officers, have been in or have had children in Midway choirs, and continue to support MHS fine arts.

Pam Watts, a member of the Midway ISD Board of Trustees, and her husband Brent Watts also performed alongside their son, Evan.

The CTCS is an auditioned community chorus in Waco, TX. Founded by former Baylor School of Music Professor Robert Young in 1976, the ensemble presents three to four concerts each season and is committed to the performance of important compositional milestones in the choral art.

CTCS members come from communities throughout Central Texas and from all walks of life – stay-at-home moms; business leaders; community activists; faculty from all levels of education; and exceptional high school singers.

One of the unique aspects of the chorus is the participation of family units – husbands and wives; dads and sons; moms and daughters; even entire families often join together to have the wonderful experience of singing with CTCS.

The Carnegie hall performance featured technically advanced pieces and required over 10 hours of practice with the productions’s director, Jonathan Griffith. Griffith describes the performance as “full of energy, excitement and polish.”

Congratulations to all CTCS performers! Carnegie Hall has been open since 1891 and seats well over 2,500 people. Midway students, parents, and alumni have transitioned the MHS Fine Arts tradition of excellence in performance to a renowned and historic stage.