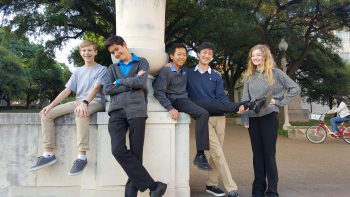 The MHS Debate team competed at the UIL CX State tournament Austin. The team of Anna Lucas and Stephen Bender competed at State for the first time and went 2-2 through preliminaires despite last minute changes in partners.

The team of Edward Kim and Hanson Kuang went 4-0 through preliminaries! They advanced through Octa-finals on a 3-0 decision.

Midway KK (one of the debate duos) made it to Quarterfinals on a 2-1 decision. This is the first time they have passed through the Octa-finals.

Thea teams have competed at the NDCA National Tournament the past several years and qualified this year again.

Edward Kim and Hanson both are competing at Regionals.