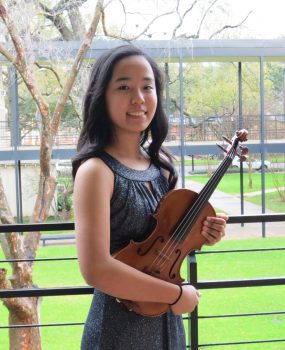 Haeun Moon is 15-year-old violinist from Waco, TX.  She studied violin with Dr. Julia Hardie and is currently a student of Professor Brian Lewis at the University of Texas at Austin. She is a member of the Midway High School Camerata Orchestra, the Waco Symphony Youth Orchestra and the Central Texas String Academy.

Haeun was the youngest finalist in the Lynn Harrell Concerto Competition of the Dallas Symphony Orchestra, and was selected as the Silver Medalist for the Houston Symphony League Concerto Competition in 2016.  In addition, she invited to attend the Great Mountains International Music Festival on a full scholarship, and had a privilege to study with world-renown violinists Boris Brovtsyn, Radu Blidar, Nam Yun Kim, and Koichiro Harada.

The three-tiered MTNA Senior String Competition begins at the state level. As the first-place winner of state’s competition in Nov. 2016, she advanced to the South Central division competition in Arkansas in Jan 2017. After winning the division competition, she competed as one of seven national finalists at Baltimore in March 19. As a national competition winner, Haeun received $2,000, provided by the MTNA Foundation Fund. The Senior Division is open to artists aged 15-18. The String category includes Violin, Viola, Cello and String Bass.

Music Teachers National Association is a nonprofit organization of independent and collegiate music teachers committed to furthering the art of music through teaching, performance, competition and scholarly research. Founded in 1876, MTNA is the oldest music teachers association in the United States.

For more information about MTNA, contact the MTNA national headquarters at (513) 421-1420, mtnanet@mtna.org or visit the website at www.mtna.org.