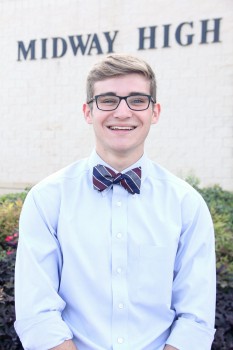 Christopher Joseph Curry, a senior at Midway High School, has been named a 2016 National Merit Finalist for his score on the PSAT test, scoring among the top one percent of the more than 1.5 million students who took the exam to earn the distinction. The National Merit Scholarship Program is a nationwide competition for recognition and awards conducted by the National Merit Scholarship Corporation. In each annual program, approximately 50,000 academically talented high school students are honored, but only 15,000 of them are named finalists.

Chris is the son of Philip and Aimee Curry of Woodway. Chris is a member of 2014, 2015 and 2016 TMEA All-State Choirs, an AP Scholar, National Honor Society President, and earned National Spanish Exam Bronze and Silver Medals. He is involved in PALs, NHS, Student Council, Choir and FCA. He plans to attend Texas A&M University to major in Mechanical Engineering and acquire an MBA.

The final step of the program, a honing to 7,400 National Merit Scholars, will be announced in March. All winners of Merit Scholarship® awards (Merit Scholar® designees) are chosen from the Finalist group based on their abilities, skills, and accomplishments—the Finalist’s academic record, information about the school’s curricula and grading system, two sets of test scores, the high school official’s written recommendation, information about the student’s activities and leadership, and the Finalist’s own essay.