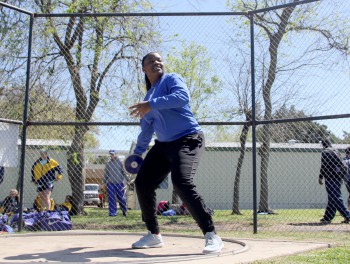 The JV girls ran away with the team championship by 80 points over the second place team.  Gold medalists were Kyra Webster in the 100, Camryn Green in the 100 hurdles, Joy Brewer in the 300 hurdles, Jazmine Rice-Brunskill in the 800, Julia Scott in the pole vault, Meredith Kaminski in the 1600 and 3200, and the 1600 relay team of Rice-Brunskill, Lakyn Glasson, Ayana Holston, and Ja’Naiya Davis.  Medalists (and total medals won) were Webster (5), Rice-Brunskill (2), Brewer (3), Green (2), Kaminski (2), Holston (3), Davis (5), Jasmine Moore, Lasha Wineinger, Ca’Leyah Burrell, Nadia Hill, Gracie Hutson (2), Charlotte Kaminski, and Lindsay Toups.

The top 4 in each varsity event qualified for the area meet to be held Thursday, April 21 in Copperas Cove.

Engaging Students Through the Wonders of Coding